The trade deficit in Lebanon contracted by 12.04% (year on year) y-o-y by the end of December 2015, to register $15.12B due to a 11.83% decline in total imports outpacing the 10.75% fall in total exports. This decrease is largely affected by the international low prices of oil and the weak euro. Taking out the effect of mineral products, trade deficit tightened by 5.13% to $11.71B.

By the same token, total exports fell yearly from $3.31B by December 2014 to $2.95B, with a 13.21% decrease in volume to 1.94M tons by the end of 2015. This might be linked to the disruptions of some major trade routes in the face of Lebanese exports.  In details, the exported “prepared foodstuffs, beverages, and tobacco” are on the top of Lebanese exports with 16.35% share of total exports, followed by the “machinery and electrical instruments” and “products of the chemical or allied industries”, with respective market shares of 14.02% and 13.92%. In terms of main Lebanese exports destinations, Saudi Arabia, United Arab Emirates and Iraq are on the top of the list, grasping corresponding weights of 12.08%, 10.59% and 7.61%.

Lebanon Imports/Exports (in $B) 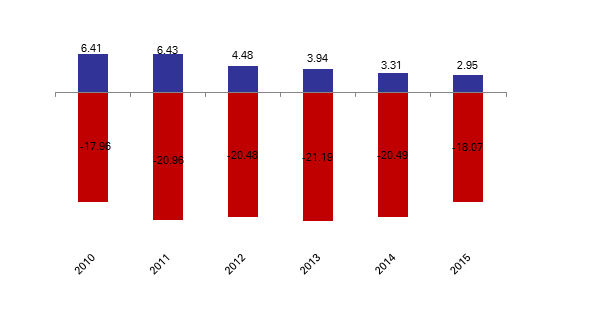