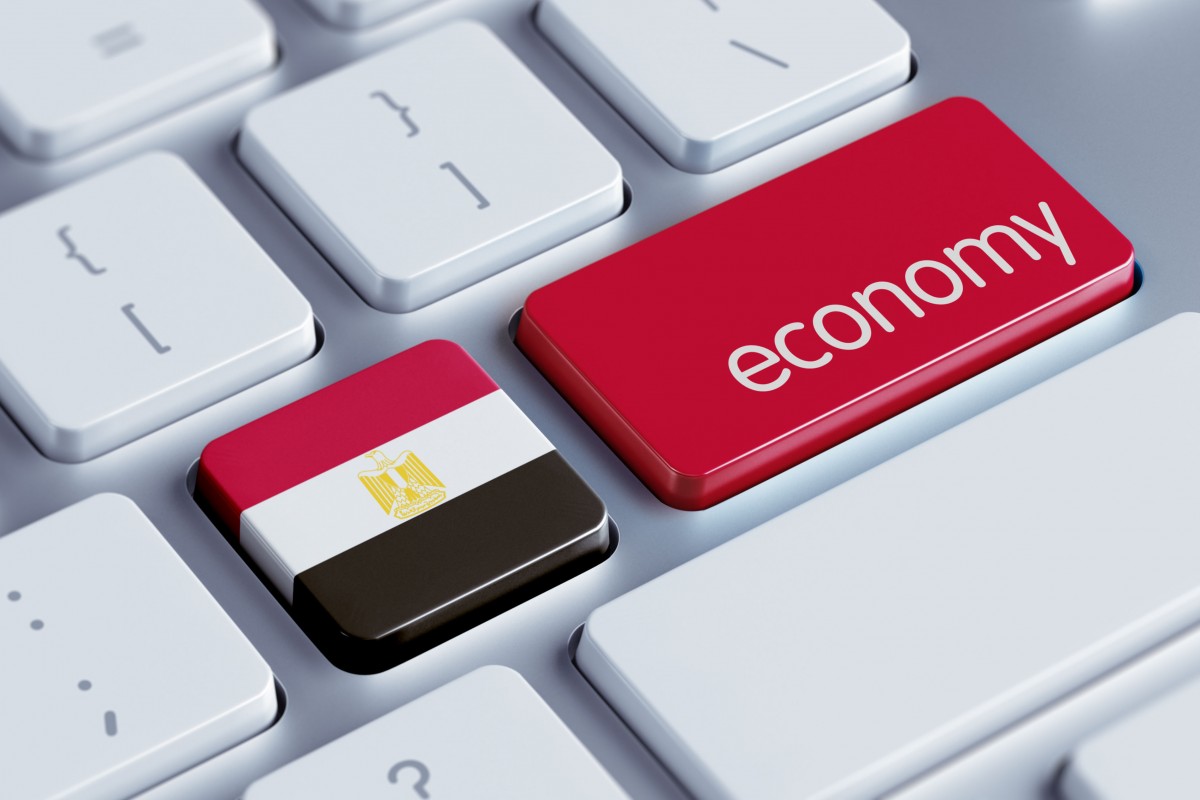 It was a busy last quarter in Egypt at all levels. The country completed the parliamentary elections between October and December 2015, thus concluding the 3rd and final step of its political roadmap. Despite a low 28% participation, Egypt succeeded, for the first time since 2012, in electing a new parliament comprising 568 members. The security situation failed to improve in Q4 2015 as terrorist attacks kept on recurring mainly in Rafah, Giza and el Arish. Sinai witnessed by the end of October the quarter’s worst terrorist attack as the Islamic State claimed responsibility for the Russian plane crash (Metrojet Flight 9268) where all the 224 crew members and passengers died. In order to fight terrorism, Egypt continued its plan to create a buffer zone in the Sinai Peninsula, however this has raised global outrage in September as the process involved mass home demolitions forcing the eviction of nearly 3,200 families. 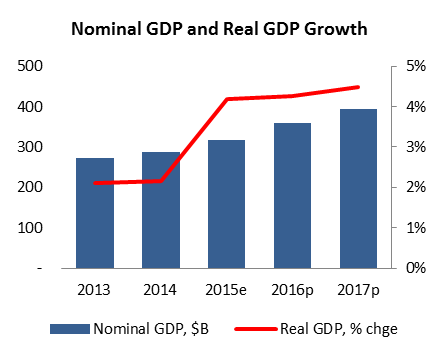 Despite the poor security conditions of the country, Egypt accomplished several achievements in Q4 2015, including the selection of firms that will complete the impact studies related to the $3.37B Ethiopian Grand Renaissance Dam project with Ethiopia and Sudan. Another agricultural project was announced consisting of the expansion of Egypt’s farmland by 20% through the reclamation of 630,000 hectares in the Western Desert bordering Libya, sending the total space of available farmland to 3.99M hectares.

On the economic front, the latest data showed yearly improvement in Egypt’s economic performance during the Fiscal Year (FY) 2014/15. In fact, real Gross Domestic Product (GDP) stood at 4.2% in FY 2014/15 compared to a lower 2.2% in FY 2013/14. This was mainly attributed to the improvement of several sectors such as the manufacturing, tourism, construction and real estate activities despite the continuous deterioration of the extractions sector. Similarly, the country’s non-oil manufacturing sector mimicked the expansion as the Purchasing Managers’ Index (PMI), rose from an average of 48.1 in FY 2013/14 to 50.1 in FY 2014/15. Accordingly, the increase of the index, above the 50 neutral-mark, signaled that Egypt’s business conditions showed progress in FY 2014/15 compared to the economic contraction in the previous year.

As imported inflation remained contained, inflation averaged 6.98% between October and December 2015 compared to 7.99% over the same period in 2014. This was mainly the result of the global weakening of commodity prices, the ongoing depreciation of the Euro and the bearish trend of oil prices depicted since mid-June 2014.

On another front, the government and the ECB reached a macroeconomic framework on the 17th of December, which included 4 main pillars: implementing structural economic reforms to improve the challenging investment environment, narrowing the fiscal deficit to sustainable levels, containing inflation over the medium term and reducing trade deficit by empowering local production.

Externally, the bearish trend of oil prices failed to trigger down Egypt’s trade deficit and sequentially the current account, due to worsening services, receipts and payments during Q1 of FY 2015/16. This was heavily reflected on Egypt’s Balance of Payments (BoP) that turned negative in the first quarter of FY 2015/16 at $3.66B compared to the $410M surplus recorded during the same period a year earlier. The current account deficit more than doubled as it reached $3.98B in Q1 FY2014/15, up from $1.6B in FY2014/15. As for trade deficit, it stagnated at $10.0B following respective 26.4% and 10.4% y-o-y drops in total exports and imports.

Tourism in Egypt saw negative performance during 2015 mostly on the worsening security situation following several terrorist attacks on touristic locations. As a result, total travel receipts displayed a 17.5% yearly fall in Q1 2015/16 to $1.73B. The Russian airplane crash prompted Moscow and London to halt flights to Egypt which heavily impacted the total number of incomers as European tourists constitute more than 70% of total tourists.  In fact, the number of travelers stood at 8.89M in the first eleven months of 2015, recording a 2.3% yearly drop from the same period a year earlier. The improving number of tourists from all continents failed to offset the 6.4% yearly decrease in the number of European tourists by November 2015. Egypt’s official records also revealed a 9.0% yearly drop in the number of nights during the same period to 81,728.

However, the occupancy rates in Cairo 4 and 5-star hotels averaged 49% in 2015 compared to 37% in 2014. This is mainly due to the improving performance of tourism during the first half of the year which more than offset the deterioration in the second half of 2015. Similarly, the average room rate and the rooms’ yield posted respective increases of 19.6% and 57.6% y-o-y to $112 and $55. 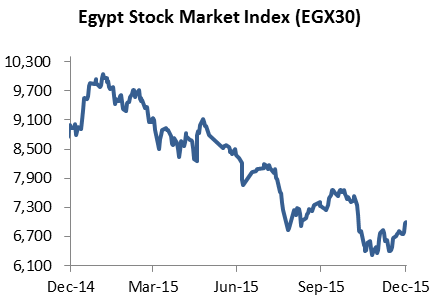 As expected, the Central bank renewed its boosting packages to support the sector’s performance, given its importance as major source of foreign exchange reserves, through the extension of the maturities of retail facilities for an additional 6 months without implying any late payment interests.

Egypt’s public finances deteriorated during the FY 2014/15 as reflected by the widening fiscal deficit and Gross Domestic Debt (GDD). The country’s fiscal deficit increased by a yearly 24.5% to settle at $40.26B by the end of June 2015 on rising fiscal revenues that were outpaced by bolstering expenditures. In reality, the Egyptian public inflows saw a 14.5% increase in FY 2014/15 to $68.00B, while the public expenses surged by 18.0% to $106.11B. As for the GDD, it edged up by 16.5% to reach $270.31B. Worth mentioning that Egypt is expected to receive $3B from the World Bank over the coming 3 years to help the government in decreasing its budget deficit and maintaining its economic reforms’ program, of which $1B will be allocated by the end of 2015.

On the monetary front, the net international reserves at the Egyptian Central Bank (CBE) registered a level of $16.45B by the end of December 2015 after dropping to $16.34B in September 2015. Despite the 7.3% yearly uptick from December 2014’s level, the deterioration of Egypt’s net international reserves between September and December followed the repayment of $1.5B maturing USD notes issued in 2005 (including the final coupon). As a result, the foreign reserves almost covered 3 months of imports in September, which pushed the ECB to devaluate in October the Egyptian pound for the 3rd time in 2015. In fact, the exchange rate reached EGP 7.83/USD by the end of December 2015 after hitting EGP8.02/USD by the end of October 2015, compared to a previous quote of EGP7.15/USD by the end of 2014. In October, Hisham Ramez submitted his resignation following waves of criticism related to an overvalued Egyptian pound negatively weighing on the country’s trade position. Egypt’s president appointed Tarek Amer as the new governor for the ECB, with his tenure to start in November 27, 2015.

In addition, the Monetary Policy Committee (MPC) raised in December the overnight deposit rate, overnight lending rate, and the rate of the CBE’s main operation by 50 bps to 9.25 percent, 10.25 percent, and 9.75 percent, respectively. Also, the CBE launched a stimulus program for Small and Medium Enterprises (SME) which consisted of encouraging banks to increase their lending to reach 20% of their portfolio in the next 4 years. As a matter of fact, credit facilities at the Egyptian commercial banks rose by 26.9% y-o-y in November to reach $100.04B, noting that 73% were disbursed in local currency. Total deposits also went up from $194.18B in November 2014 to $239.75B by the end of November 2015. Over the same period, local currency deposits, constituting 80.6% of the commercial banks’ total deposits, increased by 22.6% y-o-y to $193.28B compared to a faster 27.4% progress in Foreign Currency deposits to $46.47B.

The Egyptian bourse maintained the downward trend in the last quarter of 2015 as revealed by the 4.5% quarterly decline of the EGC 30 index, widening its yearly loss to 22.2%. In details, the gauge went from 7,333 points by the end of September 2015 to 7,006 points by the end of December 2016. As a result, the market capitalization narrowed by the end of 2015 by 1.4% from Q3 2015 to $54.85B. Despite the negative performance, activity in the last quarter of the year saw substantial progress as the total traded volume and value increased by 95.3% and 137.3% from Q3 2015 to 16.31B shares worth $6.02B. This was probably due to heavy selling by investors who were negatively impacted by the international developments related to the Paris attacks in addition to the repercussions of the Russian plane’s crash in the Sinai desert. This was revealed by the rising number of trade transactions recorded on the Egyptian stock exchange as they went up from 898,589 in Q3 2015 to 1.51M in Q4 2015.