Home » MENA in a Glimpse » Lebanon: Ending the Year in Stagnation

Lebanon: Ending the Year in Stagnation

Lebanon ended 2015 with disparate developments on the security and political fronts. Two suicide bombings alarmed the security situation in November. However, 2015 was wrapped with positive expectations after the release of the Lebanese soldiers taken hostage by Al Nusra Front and the positive political talks regarding a potential breakthrough in the 19-month presidential vacuum. 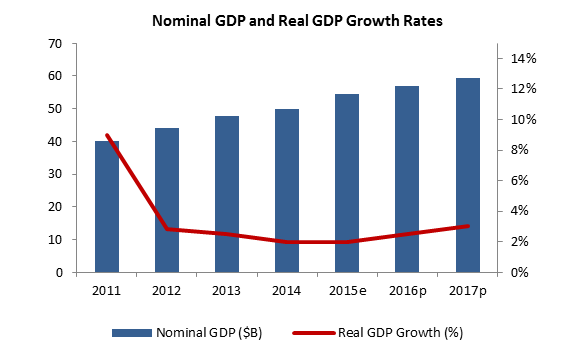 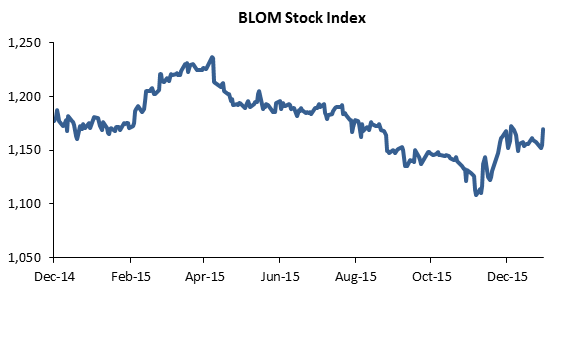 The repercussions of the deteriorating regional and domestic conditions drove GDP growth down to a slight rate of 0.5% during 2015. Similarly, the BLOM Purchasing Managers’ Index remained below the 50 mark, at an average of 47.3 points in Q4 lower than the average 48.4 points recorded in the third quarter of 2015.

Falling oil prices and the depreciating European currency against the US dollar continued to pressure the Lebanese Consumer Price Index (CPI), which declined by 3.40% y-o-y to 95.92 in December 2015. Transportation prices and “water, electricity, gas and other fuels” sub-index dropped 7.66% and 17.57%, respectively, compared to December 2014.

Likewise, construction continued its plunge, with the number of permits falling 9.43% y-o-y to 15,092 by December 2015. Noting that permits are usually issued at least 6 months after applications are filed, the drop in construction activity was due to the ongoing slowdown in the whole economy.

As for tourism, the number of incomers reached a 4-year high, as the Lebanese security scene preserved its stability. According to the Ministry of Tourism, the number of tourist arrivals surged by a yearly 12.05% to 1.52M in 2015. Global Blue’s Tourist Spending Report revealed that tourist spending in Lebanon grew 2% y-o-y in 2015. Accordingly, hotel occupancy progressed, with the average rate adding 5 percentage points to 56% by November. Average room rate and average room yield added 2% and 11.5% to $175 and $99, respectively.

Lebanon’s Balance of Payments (BoP) deficit widened from $1.41B in 2014 to $3.35B in 2015. The decline in capital inflows and Foreign Direct Investment (FDIs), as a result of the ongoing domestic developments and the regional upheavals, in addition to the substantial trade deficit are the main reasons behind the deficit in BoP.  However, the trade deficit tightened by 12.04% y-o-y, to record $15.12B in 2015, mainly due to the bearish Euro and oil trends. Total imports dropped 11.83% slower than the 10.75% decline in total exports.

Fiscal deficit broadened 17.38% yearly to $2.61B in the first three quarters of 2015. Therefore primary surplus dropped to $672M compared to a higher primary surplus of $867B, during the same period of 2014. This was mainly driven by the 8.60% decline in total revenues exceeding the 2.86% drop in total expenditures. The drop in revenues resulted from the 1.43% decrease in revenues coming from taxes on income, profit, capital gains, and property, and a 6.15% plunge in VAT revenues. The plummet in VAT revenues was due to the decrease in the value of imports, as the Euro and Yen depreciated and fuel prices declined. The major decrease in expenditures was due to the 40.44% plummet in EdL transfers. The deficit led Gross public debt (GPD) to widen by 5.63% y-o-y to reach $70.30B end of December 2015.

MoF Raised LP 187.82B in the Treasury Bills’ Auction Held on the 25th of February
Qatar: Tarnished by Cheap Oil