In more details, and in terms of value, the three major product categories that were imported to Lebanon by February 2016 were mineral products (24.08% share of total imports’), “products of the chemical or allied industries” (10.55% share of total imports) and “machinery and electrical instruments (9% share of total imports). The change in imported mineral products, on a cumulative year-on-year basis, displayed an increase of 38.17% from February 2015. This was mainly caused by the 51% increase in the volume of imported mineral products. However, the value of the “products of the chemical or allied industries” and “machinery and electrical instruments” downturned by an annual 3.57% and 7.42%, respectively. Notably, the three major countries that Lebanon imported goods from, in the first 2 months of 2016, were China, Italy and Holland with corresponding weights of 11.48%, 7.56% and 7.23%.

Similarly, the major exported products in terms of value by February 2016 were “pearls, precious stones, and metals”, constituting 16.91% of total exports, which went down by 15.03 % y-o-y. Furthermore, “prepared foodstuffs, beverages, and tobacco” (16.33% share of total exports) experienced a yearly detraction of 8.92% by February 2016. It seems that the drop in the prices of fast moving consumer goods is following the trend of the internationally falling commodity prices. “Machinery and electrical instruments” (14.80% share of total exports) undergone a 2.35% increase in the value of exports. In terms of the major destinations of the Lebanese exports, United Arab Emirates, Saudi Arabia and South Africa grasped respective weights of 13.37%, 8.45% and 8.22% by February 2016.

Lebanon Imports/Exports by February (in $B) 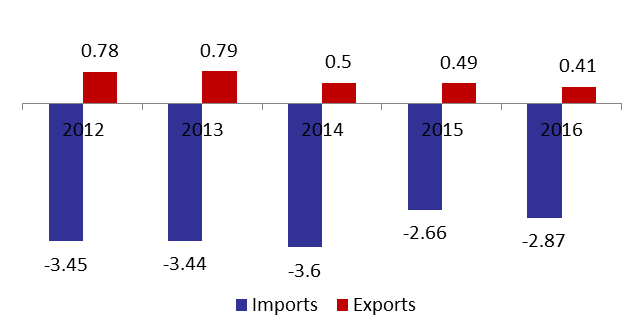