Amid a continuing political stalemate, with around 21-month of political vacuum, most of Lebanon’s economic indicators recuperated from the low levels reached in the previous years. However, the geopolitical dynamics were not as smooth, as GCC countries (Bahrain, Kuwait, Qatar, and Saudi Arabia) warned their citizens from travelling to Lebanon. This occurred after Saudi Arabia halted $4B in aid to the Lebanese Armed Forces in response to diplomatic differences with the Lebanese government. 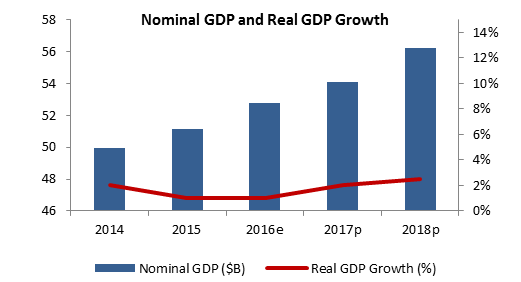 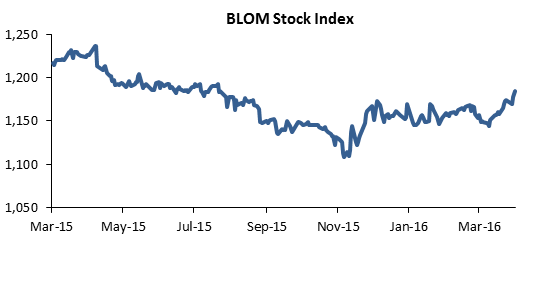 Due to the shaky political environment, the International Monetary Fund estimated Lebanon’s Real Gross Domestic Product for 2016 to grow at the same pace of 2015. The BLOM Purchasing Managers’ Index remained below the 50 mark, at an average of 47.2 points in the first quarter (Q1) of 2016, marginally lower than the 47.3 points registered in the previous quarter.

Similarly, construction improved after 4 years of frail activity. The number of permits reached 4,067 by February 2016, compared to 1,996 in the same period of 2015. Noting that permits are usually issued at least 6 months after applications are filed, the growth in construction activity could be partly attributed to contractors’ optimism regarding the upcoming year, and the improved security situation in the North.

As for tourism, the number of incomers increased by 9% yearly to 191,808 by February 2016. Accordingly, hotel occupancy improved, with the average rate adding 2 percentage points to 55% by February. Nonetheless average room rate and average room yield lost 16.7% and 14.3% to $142 and $79, respectively, which could be the result of the type of tourists in light of the warnings issued by GCC countries and/or following the trend in the region. However, Global Blue’s Tourist Spending Report revealed that tourist spending in Lebanon declined 12% y-o-y in Q1 2016.

Lebanon’s Balance of Payments revealed a deficit of $356.3M in the first two months of 2016, compared to a higher deficit of $432.8M in the same period last year. In spite of the relative improvement, the overall weakening in European and GCCs economies might be still weighing on the remittances and Foreign Direct Investments (FDIs) to Lebanon.