Home » MENA in a Glimpse » Egypt: Torn Between Boosting Foreign Reserves and Bearing the Burdens of Lower Pound

Egypt: Torn Between Boosting Foreign Reserves and Bearing the Burdens of Lower Pound 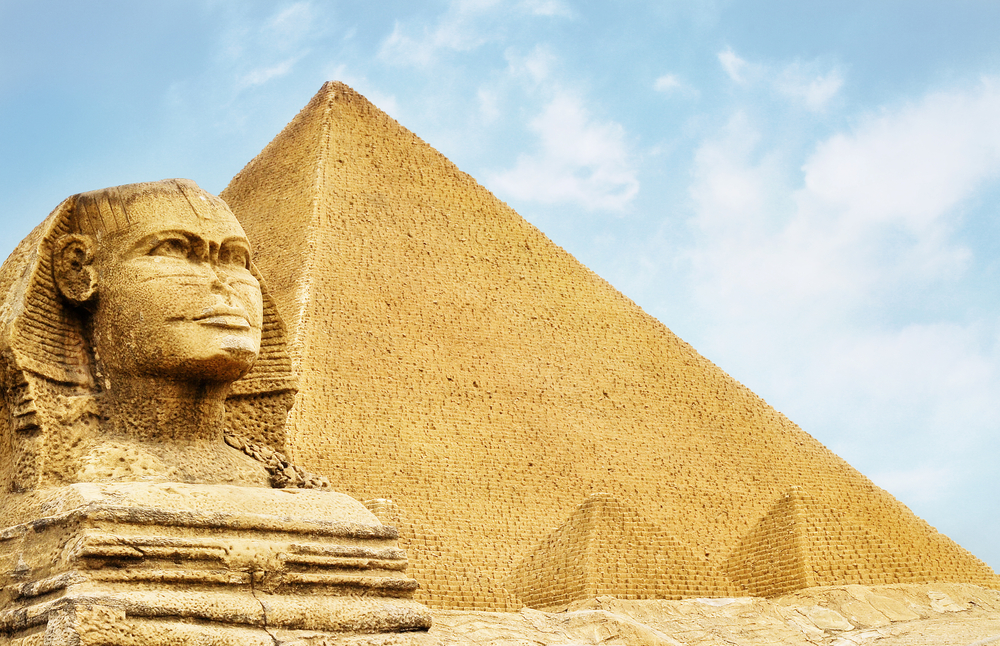 No economic progress was recorded when it comes to Egypt during the second quarter of 2016. The country kept on suffering from draining foreign currency (FC) reserves and an overvalued exchange rate. From one side, the political instability, which painted the country since the eruption of the Arab Spring, heavily weighed on tourism and foreign investment and hence on inflows of FC. From the other side, the devaluation of the pound that took place during the first quarter of the year failed to narrow the gap between official and unofficial currency rates and worsened the country’s existing fiscal and current accounts. This has pushed the government to approve “in principle” the Value Added Tax (VAT) bill in May (later amended by the parliament at the end of August to include a rate reduction from 14% to 13% and an increasing number of exempted items), and which is part of the 2014’s fiscal reform program targeting lower energy subsidies and narrower fiscal deficit. This step aims at increasing the government’s fiscal revenues, yet is expected to intensify inflationary pressures. 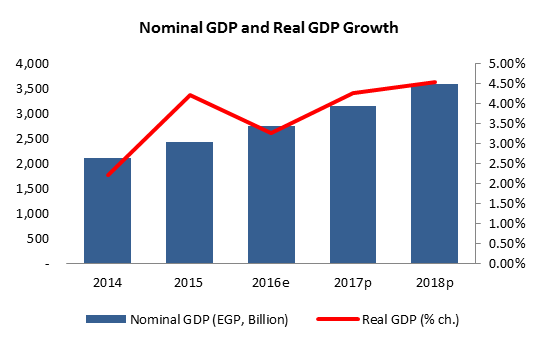 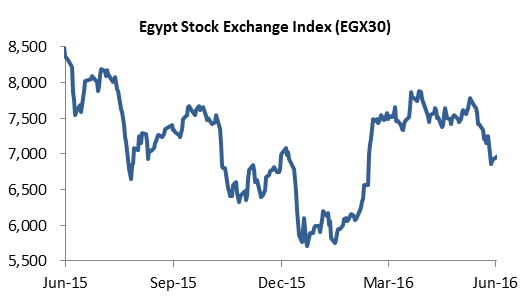 Resultantly, the International Monetary Fund (IMF) expected real Gross Domestic Product (GDP) growth to slip to 3.3% in 2016 amid talks between Egypt and the Fund about securing a $10B loan. Still, official data revealed that the economy grew at a real rate of 4.5% during the first half of the fiscal year (FY) 2015/16. This mainly resulted from the 4.8% increase in domestic demand as opposed to the 0.3% downtick in net external demand. From a sectorial perspective, construction and real estate activities were mainly behind the real Gross Domestic Product (GDP) growth despite the deteriorating tourism activity. Despite the recorded economic growth, one of the quarter’s highlights was the anti-government protests following the transfer of control of Egypt’s Red Sea islands Tiran and Sanafir to Saudi Arabia in April, which was annulled two months later by a court vote.

As for the activity of the country’s non-oil manufacturing sector, Egypt’s Purchasing Managers’ Index (PMI) revealed an economic contraction in the FY 2015/16, down from the stagnating performance of the previous year. In fact, the index averaged below the 50 neutral-mark between July 2015 and June 2016 at 47.8 points, compared to the 50.1 reading registered during the same period a year earlier.

On a different note, rising inflation levels were one of the short term implications of the Central Bank’s decision to devalue the Egyptian pound. As a result, monthly core inflation hit double digits once again in May and then in June when it recorded respective levels of 12.2% and 12.4%. Still, core inflation averaged 8.03% in FY 2015/16 close to the previous FY’s average level of 8.13%.

On the external front, the currency devaluation did not have a positive impact on Egypt’s external position during the first three quarters of FY2015/16, but in contrary external indicators reached alarming levels. In fact, the Balance of Payments reported a more than threefold growth in its deficit to $3.64B, up from a previous $1.05B. As for the current account, it recorded a deficit of $14.47B in July-March 2015/16 as compared to the $8.35B deficit recorded in the same period last year. This came about despite the stagnating level of trade deficit that slipped by a mere 0.78% to $29.32B as a result of exports (-21.6%) decreasing at a faster pace than imports (-8.4%). In fact, a cheaper pound did not made Egyptian exports more competitive but in contrast put more pressure on importers as they were obliged to pay higher prices for their imported products amid a shortage in foreign currency. In reality, the widening deficit of the current account resulted from a narrowing surplus in Egypt’s balance of services. For instance, the expansion of the Suez Canal did not boost its revenues as revealed by the 4.9% y-o-y drop in its receipts to $3.88B in July-March 2015/16. Similarly, the waning tourism sector led travel receipts to substantially narrow from $5.47B between July 2015 and March 2016 to $3.26B in the same period this year.

On the brighter side, and given the relatively stable security situation, investors’ willingness to place their funds in the Egyptian market remained strong. Several alliances, deals and loans took shape during the quarter and were topped by China’s support to Egypt’s $45B new administrative and business capital. Another $25B Russian loan was granted to Egypt to build nuclear power plant. In addition, the United Arab Emirates (UAE) promised $4.0B to support Egypt’s economy, with half of it intended for investment projects and the other half will be a deposit at the Central Bank of Egypt (CBE) to support its FC reserves. This was reflected by the rising surplus of the capital and financial account from $6.65B in July-March FY 2014/15 to $13.91B in the same period of FY 2015/16. Among others, Foreign Direct Investments (FDI) grew 14.5% y-o-y to $5.85B, while the net outflows of portfolio investment in Egypt went down by 27.3% to $1.50B.

Recovery of tourism in Egypt seems out of sight, given the repetitive blows to the industry from terrorist attacks to technical failures in the aviation sector. Between January and May 2016, tourists’ number stood at 2.01M, almost half of last year’s level of 3.97M. As a matter of fact, repercussions of the terrorist attack on the Russian airplane drove the number of Russian visitors substantially down. Bearing in mind that they constitute the largest bulk of tourists to the country, Europeans’ number tumbled 68% triggering the total number of visitors down. Accordingly, the share of Europeans out of total tourists shed from 74.5% between Jan-May 2015 to 47.5% in the same period this year. Also, the number of nights contracted going from 29.54M between January and May 2015 to 11.75M in 2016. This has sent the average number of nights per tourist to 6 in 2016 compared to 10 a year earlier.

Still, despite the overall deterioration of tourism and hence hospitality sector, Cairo’s 4- and 5-star hotels revealed a relative improvement between January and June 2016. Ernst & Young’s report associated the progress to the occurrence of Mediconex exhibition that is the largest 3-day healthcare event in Egypt and North Africa and which usually attracts over 10,000 visitors. Hence, Cairo’s hotel occupancy rate rose by 10 percentage points from last year’s 48% to settle at 58%. This was coupled with improving levels of average room rate and rooms’ yield, which respectively rose by 19.2% and 43.1% to $124 and $73.

On the monetary front, devaluing the Egyptian pound did not help in narrowing the gap between the official rate and the rate on the black market. In contrast, and while the official rate went from an average of 8.0/USD in Q1 2016 to 8.9/USD in Q2 2016, the exchange rate on the black market continued its depreciation as it averaged 10.8/USD in Q2 2016 compared to 9.38/USD in Q1 2016.

In addition, the inflationary pressures resulting from the measures adopted by the CBE to ease the shortage in FC reserves led the Monetary Policy Committee (MPC) to raise interest rates during the second quarter of the year. In fact, the MPC increased on the 16th of June, for the second time, each of the overnight deposit rate, the overnight lending rate, the rate of the CBE’s main operation by 100 bps to 11.75%, 12.75%, and 12.25%, respectively. The discount rate was also increased by 100 bps to 12.25%. In the same context, the CBE’s scheme to increase reserves in FC started to bear fruit as net international reserves reached $17.55B in June 2016, up from $16.56B in March 2016, yet still below the $20.08B level reached in June 2015.

The positive momentum that marked the Egyptian stock market during the first quarter of the year was short-lived as the second quarter highlighted a deteriorating investors’ sentiment. Brexit uncertainties, Airline disasters, the Federal Reserve decision to stabilize interest rates and the ECB’s decision to raise interest rates 1% to temper the rising inflation are some of the reasons behind the negative performance of the stock exchange. As a result, the Egyptian stock index (EGX 30) lost 8.0% by the end of June 2016 to reach 6,942.52 points as compared to 7,524.99 points by the end of March 2016. This was also translated by a narrower market capitalization that stood at $24.77B in Q2 2016, registering a 7.6% quarterly drop. That said the total volume of traded shares reached 10.26B and were valued at $3.40B in Q2 2016 compared to 14.58B shares worth $3.30B in the previous quarter.

Syria: A Boiling Point for the Regime, the Opposition and the Population
The Number of Airport Passengers Reached 5.19M by August 2016