The fiscal deficit (on cash basis) of Lebanon narrowed from $3.38B in the first 8 months of 2018 to $2.95B by August 2019. The reduced deficit is attributed to a 4.81% annual decline in government spending, which outweighed the 1.13% yearly down tick in public revenues. As such, total revenues and expenditures (including treasuries) stood at $7.7B and $10.7B, respectively. Meanwhile, the primary balance which excludes debt service, posted a surplus of $368.9M over the same period, compared to a $74.2M in surplus by August 2018.

The breakdown of the government’s fiscal performance revealed that Tax revenues (composing 82.9% of public revenues) rose by an incremental 0.95% year-on-year (YOY) to $6.1B by August 2019, of which VAT revenues (constituting 26.2% of total Tax receipts) were slashed by 9.2%YOY to $1.6B. It is worthy to mention that the drop in VAT revenues was driven primarily by the stifled growth and thus reduced spending in the Lebanese economy since the beginning of the year, which outweighed the positive effect of raising the VAT rate from 10% to 11% since January 2018. For example, a sample of the VAT collected after the registration of new cars in Lebanon shows that the number of total new cars registered by August 2019 witnessed a yearly contraction of 23.9% to 19,151 cars according to the Association of Lebanese Car Importers. Moreover, revenues from the Lebanese Customs (14% of total tax receipts) lost an annual 5.1% to settle at $854.7M over the same period.

On the spending front, total government expenditures retreated by a yearly 4.8% totaling $9.9B in the first 8 months of 2019. The breakdown of spending shows Transfers to Electricite du Liban (10.2% of total public expenditures) declined by an annual 7.8% to settle at $1B. The reduction is affiliated to a 9.7% annual decline in the average international oil prices which stood at $65/barrel by August 2019. In its turn, Total debt-servicing (inclusive of interest payments and principal repayments) fell to $3.3B by August 2019, down by an annual 3.9%. It is worthy to note that interest payments on domestic debt (62.4% of total interest payments) fell by 5.7%YOY to $1.9B, while interest payments on foreign debt declined by 1.3%YOY to $1.2B even though gross debt by August 2019 climbed by 3.1%YOY to 86.3B. This is most probably because the government settled the interest expenses from its deposits with BDL.

Treasury transactions in their turn (inclusive of revenues and spending that are of temporary nature) posted a deficit of $450.5M by August 2019, compared to $467.5M same time last year. In details, treasury expenses of which Municipalities, dropped from $505.6M to $300.9M over the same period. 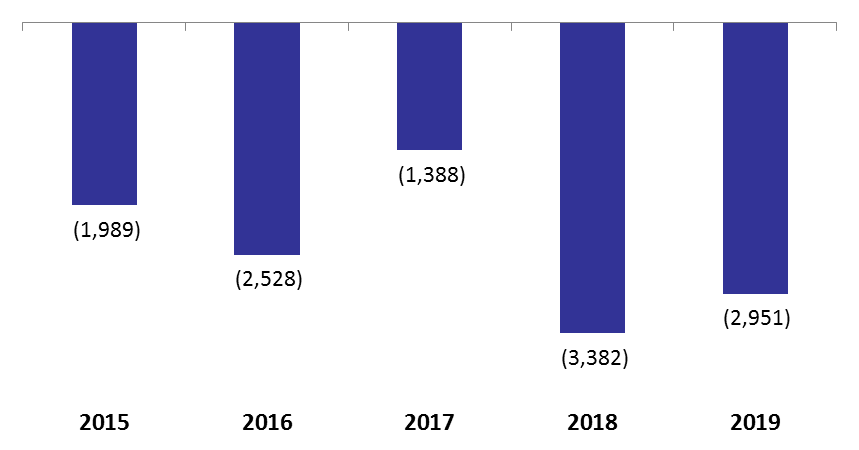