According to Ernst & Young’s Middle East hotel benchmark survey, the occupancy rate in Lebanon’s 4- and 5-star hotels reached 61.70% in 2019, compared to 65.10% during the same period last year.

Surprisingly in 2019 Beirut’s hotel occupancy rate was accompanied by annual upticks in Beirut’s average room rate and rooms yield, which climbed from $188 and $122 by December 2018 to $201 and $214 by December 2019, respectively. However, the demonstrations that have convulsed Lebanon since mid-October, have led to a drop in all KPI parameters during the month of December alone. In details, Beirut’s hospitality market witnessed a 74.1% annual decrease in RevPAR to $38 in December 2019. This significant decline stemmed from an occupancy decrease of 54.6 percentage points to 24.2% in December 2019, conjoined with an ADR drop of 25.3% in December 2019 when compared to the same period last year. The subdued performance for Beirut’s hospitality sector is expected to continue in the short-to medium-term until the economic-political situation is stabilized within the country.

Regionally, Hospitality markets in Doha and Riyadh observed a growth across occupancy and RevPAR in 2019 when compared to 2018. Doha’s hospitality market witnessed a RevPAR growth of 10.1% from US$71 in 2018 to US$78 in 2019, which was driven by an occupancy increase of 8.9 percentage points, from 61.0% in 2018 to 69.9% in 2019. However, ADR decreased by 3.9% in 2019 when compared to 2018 to $112. Doha’s hospitality sector unveiled an improved performance during the year mainly driven by the successful hosting of around 58 iconic sporting events and 31 international championships including IAAF World Athletics Championships Doha 2019 and FIFA Club World Cup Qatar. The cooperation between the Qatar National Tourism Council and World Tourism Organization has supported the MICE segment demand as well. Furthermore, the launch of an ‘open visa’ policy and the expansion of air routes have also facilitated the tourism growth to the country. The existence of a wide range of world class events and festivals are expected to support a sustainable future for Doha in the short to medium term.

Riyadh observed a drop in ADR by 6.2% in 2019 to $162 but experienced an occupancy growth of 8.5 percentage points, up from 56.0% in 2018 to 64.5% in 2019, which resulted in a RevPAR increase of 8.1%, up from US$97 in 2018 to US$105 in 2019. In 2019, Riyadh took the necessary steps to position itself as an entertainment destination within the Kingdom with the success of several leisure events and festivals such as Riyadh Season, and Riyadh Shopping Festival. Moreover , the decision made by the Kingdom to relax visa restrictions and the introduction of e-tourist visas and visa on arrival have also played a significant role in the increase of visitors to the country.

Dubai’s hospitality market witnessed a drop in all KPIs in 2019 when compared to 2018, but maintained its position as the RevPAR leader in the region. In details, Dubai’s hospitality market observed a RevPAR drop of 14.7% from US$199 in 2018 to US$170 in 2019. This decrease was driven by an ADR drop of 14.0% from US$264 in 2018 to US$227 in 2019, with the occupancy levels dropping marginally from 75.6% in 2018 to 75.0% in 2019. Dubai’s hospitality sector maintained a softer performance throughout the year, which can be largely attributed to the significant supply that entered the market in preparation for Dubai Expo 2020. The period ahead appears optimistic with the ongoing cruise season 2019-2020, extensive promotional campaigns and planned MICE events such as the 215th International Conference on Oil, Gas and Petrochemistry (ICOGP), though this can be altered downwards due to the spread of coronavirus. 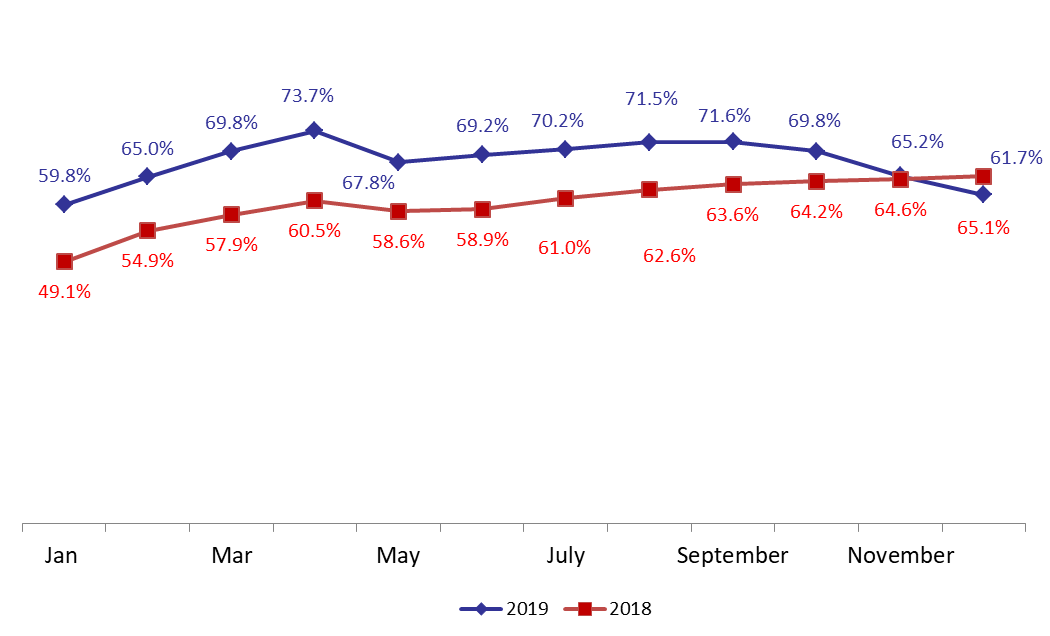