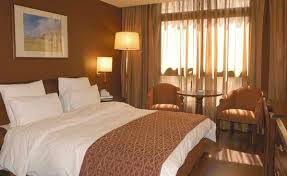 Ernst and Young’s Hotel Benchmark Survey revealed that Beirut’s hotel occupancy rate declined by 4 percentage points (pp) year-on-year to reach 36% in July 2014, recording a six-month low. This came as a result of 3 explosions that occurred at the end of June, leading tourists to leave the country. The lower occupancy rate, in turn, resulted in Revenue per Average Room (RevPAR) dropping by 4.7% to $62. However, Average room rate (ARR) added 4.9% y-o-y to $170.

On a regional level and for the month of July alone, Madina (Saudi Arabia) experienced the highest surge of 18 pp y-o-y in occupancy rate to 74%, following the month of Ramadan. In contrast, Amman (Jordan) saw the worst drop of 11 pp to 33%.

In terms of Revenue per Available Room, Cairo (Egypt) experienced the best increase of 54% compared to the same month the prior year, to $21, after the election of a new president stabilized political condition. Amman was also the worst performer in RevPAR, where it underwent a plunge of 252% to $62.

Looking at Average Room Rate the best and worst performers were respectively Jeddah (Saudi Arabia), whose ARR increased by 9.4% to $279, and Cairo, whose ARR lost 9.2% to $94. 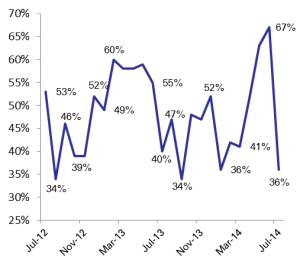