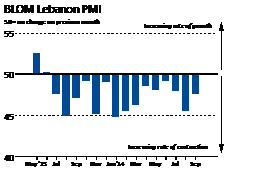 More than a year after its creation, BLOM Lebanon Purchasing Manager’s Index TM (PMI) is still providing relevant early insights about the private sector’s monthly performance, hence the Lebanese economic activity, for local and foreign investors, policy makers and economic analysts. Noting that the recently introduced index is calculated on a monthly basis, the PMI is based on a survey questioning more than 400 selected companies about modifications in their business activity compared to the previous month. The selection of firms goes in line with the national accounts’ breakdown of GDP in term of activities. As for the gauge’s composition, it is a composite index calculated as a weighted average of 5 individual sub-components: New orders (30%), Output (25%), Employment (25%), supplies’ delivery times (15%) and Stocks of Purchases (10%)

The gauge only posted economic expansion in the first 2 months of the survey (May and June 2013) and crossed down the 50.0 mark in July on rising security concerns. The PMI contracted at a faster pace to reach a bottom of 44.9 in August on several explosions on the Lebanese territory holding sectarian nature and targeting civilians. However, the following two months were more promising with October’s PMI standing at 49.1 compared to 47.0 in September 2013, alluding to a slowing economic contraction, as the PMI remained below the neutral 50.0 mark.

Lebanon, a Commodity Producer: What Frameworks to Explore?
Slight Progress of the Real Estate Market in H1 2014