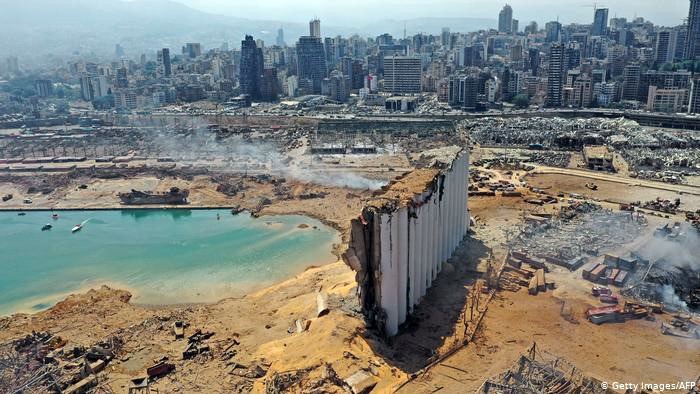 This is a critical summary of the IIF report (Lebanon: Frequently Asked Questions, December 2020). It assesses how Lebanon’s economy can recover by applying reforms requested by the IMF, while taking into consideration the Lebanese economic scene in 2020 and 2021.

The financial crisis in Lebanon is still affecting negatively the Lebanese current socio-economic situation. In details, the political deadlock is still dominating the public scene after the huge blast at Port of Beirut in the 4th of August 2020. Furthermore, after the resignation of Hassan Diab’s cabinet, PM designated Mustapha Adib failed to form a Cabinet from independent experts that was much needed in order to apply the reforms requested by the IMF. The political failure continued as the new PM designated Saed Hariri is still unable to form a government from independent experts due to political conflicts between the political parties.

Significant reforms are much needed in Lebanon in order to unlock the international financial aid, and stabilize the national exchange rate. IIF ( Institute of International Finance) has published projections that differ from the IMF regarding some economic indicators. The IIF expects the economy to contract by 26.5% in 2020, while taking into consideration the massive depreciation of the exchange rate in the black market. Furthermore, IIF projections for 2020 show a much higher nominal GDP in dollar terms and lower fiscal deficit. Also, IFF believes that the current account deficit will decrease from $11B in 2019 to $3B in 2020, due to the decrease in imports by 50%. However, the absence of capital inflows will offset the improvement in the current account, which will decrease the official reserves.

The IMF and other official donors will not back up Lebanon by any financial support until reforms are set. The most prominent reforms requested by the IMF can be concluded in two primary points: Conduct a forensic audit on the central banks (Bdl) and apply the necessary reforms on the electricity company (EDL).

It’s worth mentioning that BDL will not be able to continue subsidizing the imported cost of essential goods as the available official reserves has reach an unprecedented low-level. However, the removal of subsidies should be accompanied by a clear plan to support low income groups.

IIF believes that Lebanon can decrease its public debt-to-GDP ratio from 221% in 2020 to 127% in 2021, if it applies fiscal reforms combined with an agreement with the IMF about debt restructuring. In details IIF has prepared two scenarios concerning their projections about the economic situation in Lebanon in 2021. The optimistic scenario assumes that the new cabinet will be formed soon, and starts implementing reforms, reaches agreement with the IMF, and unlocks external financial aid. As a result, the economy will start to recover, while the additional inflationary pressures from the elimination of subsidies on essential goods will be offset by the improvement of the exchange rate to LBP5500/$. The pessimistic scenario assumes that the political deadlock will continue, and the Lebanese economy will contract again, the exchange rate will depreciate further, which will lead to higher inflation rate.

IIF urges that restructuring the Lebanese banking sector is mandatory in order to restore investors’ confidence. Furthermore, they believe that with the improvement of the balance of payments, the gradual removal of capital controls can be initiated in 2022. 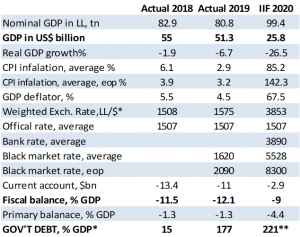 Eurobonds and other FC debt to Lebanese pounds.