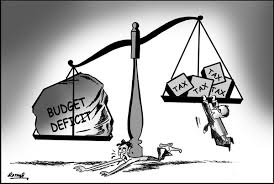 Government Revenues and Expenditures in Q1 ($B)

BBI Declined for the Second Day
Registered New Cars increased by 5.32% by August