Currency in Circulation could Increase Amid the new Circular 158

BDL’s foreign assets (grasping 13.39% of total assets) decreased by 37.04% YOY to stand at $21.10B by end of May 2021. In details, this account mainly includes Eurobonds held by BDL, and reserves that BDL possesses with foreign correspondents and other short-term instruments. In fact, this account doesn’t totally reflect the real situation. For instance, Eurobonds are estimated to be $5.03B, however those Eurobonds are currently trading on average at 15 percent per dollar, which raises questions about the real value of Eurobonds on BDL’s balance sheet.

Looking at Currency in Circulation outside of BDL (16.79% of BDL’s total liabilities) it increased from $11.83B in May 2020 to $26.45B in May 2021. In fact, currency in circulation could increase in the upcoming months due to the new circulation released by BDL that allow the depositors who hold accounts in foreign currency to withdraw 800$ from their account monthly ( half fresh dollar, half in Lebanese lira depending on the price of the new platform). As such, the currency in circulation will increase which could harm the national currency and decrease more of its value.

BDL Total, Foreign assets and currency in circulation as of May ($B) 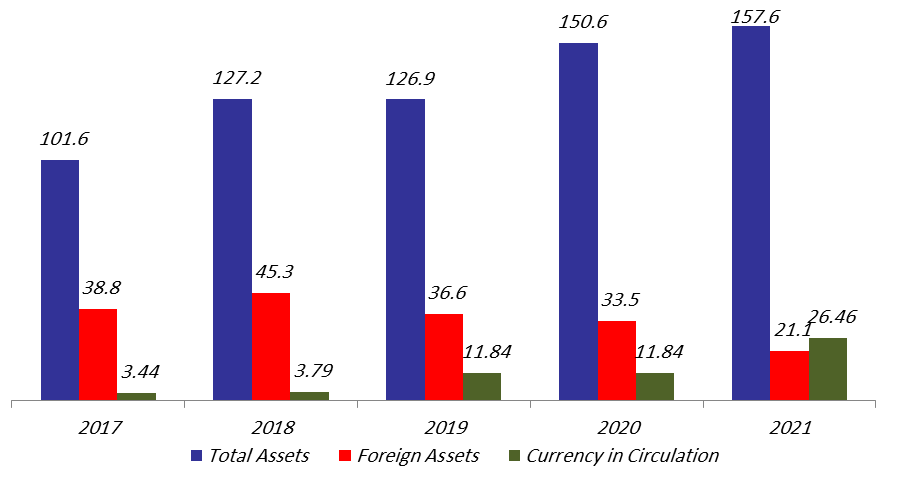