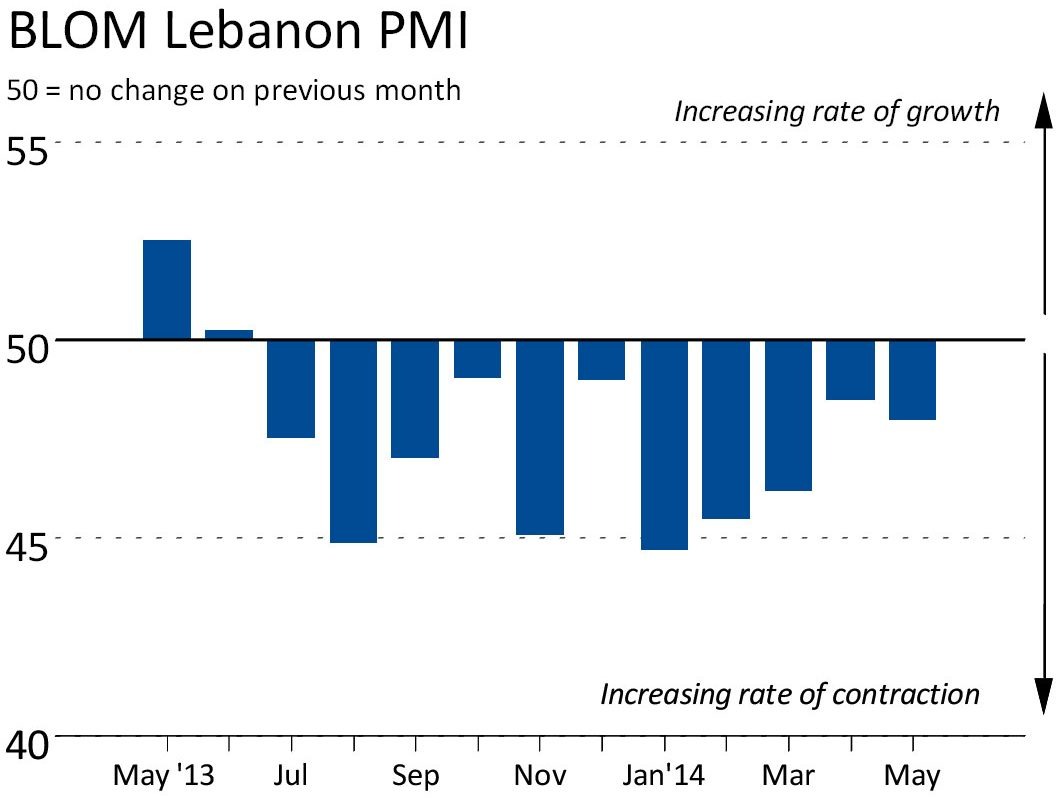 This report contains the second public release of data collected from the new monthly survey of business conditions in the Lebanese private sector. The survey, sponsored by Blominvest Bank and compiled by Markit, has been conducted since May 2013 and provides an early indication of operating conditions in Lebanon. The headline figure derived from the survey is the Purchasing Managers’ Index™ (PMI™).

The PMI is a composite index, calculated as a weighted average of five individual sub-components: New Orders (30%), Output (25%), Employment (20%), Suppliers’ Delivery Times (15%) and Stocks of Purchases (10%). Readings above 50.0 signal an improvement in business conditions on the previous month, while readings below 50.0 show a deterioration.
November data signalled the fifth consecutive deterioration in overall operating conditions at Lebanon’s private sector companies, with the BLOM PMITM posting below the neutral 50.0 mark. Falling from October’s 49.1 to 45.1, the rate of contraction picked up to the quickest in three months.

The main findings of the November survey were as follows:

Lebanese private sector companies reported sharp declines in activity and new orders in November with rates of contraction accelerating markedly since October. Anecdotal evidence suggested that fragile economic and political conditions in the country accounted for most of the deterioration in these variables. Client demand from foreign markets also weakened in November, with 10% of panellists indicating a drop in new export business. Staffing costs rose for the seventh successive month in November, albeit fractionally. Moreover, the vast

Commenting on the latest survey findings, Marwan Mikhael, Head of research at BLOMINVEST Bank said:
“The contraction in economic activity seen in November was aggravated by the suicide bombing that took place during the month as confirmed by the comparison of data collected before and after the bombing. The deterioration in operating conditions was mainly due to the declines in output and new orders, while most of the other indicators stabilized. Hope is that next month will be positive, for the country to avoid an official recession that is widely defined as two consecutive quarters of economic contraction.”

MENA Review and Quarterly Outlook – Q3 2013
Blominvest initiates coverage on Global Telecom Holding with an ACCUMULATE rating and a target price of EGP 5.18 per share