Since November 2020, worldwide fuel prices had been increasing in line with the rise in global oil prices. However, today more significant increase has been prompted in Lebanon due to the recent government decision of partially reducing fuel subsidies. At first, the attempt was to ease demand for fuel imports, lower the pressure on BDL’s foreign currency reserve, while most importantly reduce fuel hoarding that has led to shortages across the country.

In fact, financing fuel imports at the rate of 8,000LBP/USD already pushed prices up by 66.12% for 20 litres of 98-octane gasoline to reach LBP 132,400, 65.42% for 20 litres of 95-octane gasoline to LBP 128,200. While diesel prices surged by 68.89% to stand at LBP 98,800 for 20 litres. Nevertheless, a quick glimpse of world’s fuel prices indicates that this fuel price hike will not resolve the severe fuel shortage in the country nor it will stop the ongoing smuggling opportunity for the Lebanese people.

In more details, the price of crude oil has been around $65.71/Barrel by end of Week 20 August 2021. Taxes, subsidies, cost of refining, transportation and commission are all included in its retail price. In turn, the average price of gasoline around the world is around 1.17 US dollars per liter. Generally, richer countries have higher prices while poorer and countries that export oil have significantly lower prices. Taxes imposed on gasoline imply different oil prices across countries.

Among the top 10 richest economies in the world, Qatar and USA has low gasoline price with $0.52 and $0.90, respectively. Saudi Arabia’s gasoline price is $0.62 per liter while Kuwait has a lower price of $0.35 per liter. Noting that prices are high in European nations as only five countries have less than $1, while 42 out of 47 counties in Europe have prices above of $1.

Regarding Asia, this figure is 18 out of 38 countries out of which Lebanon has the lowest price among its neighboring countries with around $0.32 per liter as per an exchange rate of 20,000 LBP per USD. For the present, Syria has a higher gasoline prices with $1.46 per liter. As a result, speculation will always have a place when there are two markets exposed to each other with different prices, as is the case between Lebanon and Syria; which also means that smuggling to Syria will only stop – along with the bleeding in foreign reserves – when subsidies stop and gasoline prices in Lebanon are comparable to those in Syria. 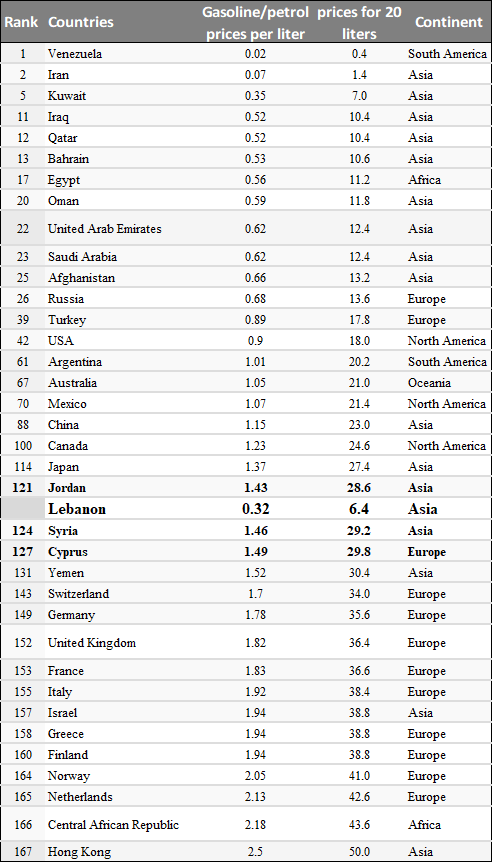