BDL’s foreign assets (grasping 10.70% of total assets) decreased by 26.60% YOY to stand at $17.32B by the end of the January 2022. In details, BDL foreign assets slumped by $394.06M over the past 15 days as BDL is trying to control the exchange market rate through injecting dollars in order to appreciate the national currency. We believe that the appreciation of the Lebanese lira could be temporary, certainly if it wasn’t combined by a clear agreement with the IMF as BDL has limited foreign reserves as BDL and he cannot continue injecting more foreign currency for a long time. The government and BDL should work for a sustainable monetary solution in order to control the exchange rate.

On the liabilities front, financial sector deposits (67.73% of BDL’s total liabilities) slightly increase by 1.15% and reached $109.63 by January 2022 compared to last year, of which more than three are denominated in dollars

Looking at Currency in Circulation outside of BDL (17.27% of BDL’s total liabilities) it increased by 29.39% and reached $27.95B by January 2022. In fact, in term of outlook the currency in circulation will probably increase further this year, as the Lebanese budget for 2022 include one-time raise in remunerations to public sector employees, which will force BDL to print more money. However, for the second half of January 2020 the currency in circulation fell by $2.65B (a trillion LBP) Because BDL was able to absorb domestic currency though its FX intervention

BDL Total, Foreign assets and Currency in Circulation of end of January ($B) 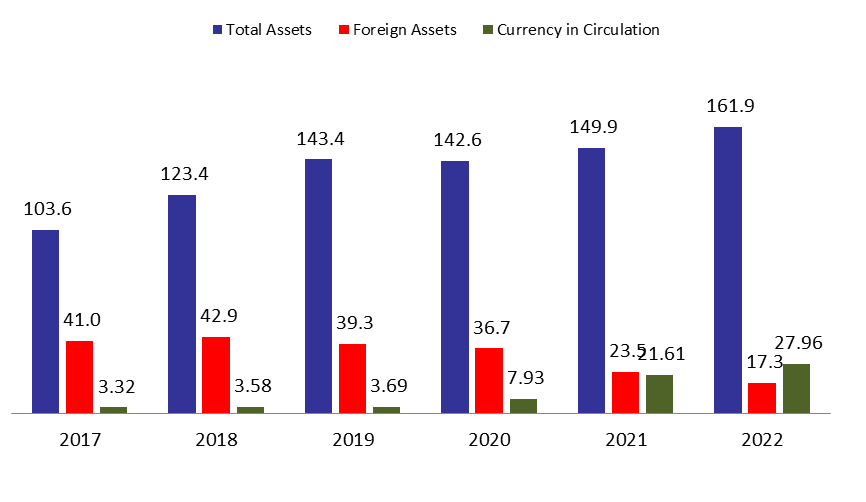