Value of Kafalat Guarantees Dipped to $93.70M by October The agriculture sector was the main sector to benefit from Kafalat guarantees with a share of 48.09%, followed by industry and tourism, with respective shares of 35.11% and 11.20% for the first 10 months of 2014. The guarantees of the agriculture and industry sectors increased by 45 and 6 to 352 and 257, respectively.  Meanwhile guarantees in the tourism sector actually declined by 40 to reach 82, caused by the poor political and economic stability.

Breakdown of Kafalat Guarantees by Sector in October 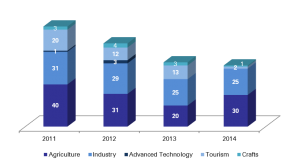