Lebanon’s Trade Deficit Narrowed to $3.43B in Q1 In specific, the three major imported product categories by March were mineral products (17.76% share of total imports), “products of the chemical or allied industries” (11.74% share of total imports) and “machinery and electrical instruments” (11.15% share of total imports). Imported mineral products experienced a massive 49.25% yearly decline from March 2014. With an inelastic demand, this contraction went parallel with the average 49.17% decrease in the price of international oil since March last year. In addition, “products of the chemical or allied industries” and “machinery and electrical instruments” downturned by 6.60% and 18.41% y-o-y, respectively. Both saw a weakening in demand, as the respective total tonnage imported fell by 7.19% and 5.87% to 137 tons and 57 tons. Furthermore, the prices of the former imports fell with the depreciating Euro, as they were mostly brought in from Germany and France. Prices of “machinery and electrical instruments” dropped with China selling about 30% of those goods to Lebanon.  Notably, the three major countries that Lebanon imports goods from were China, Italy and Germany with corresponding weights of 12.29%, 6.68% and 6.40%.

Lebanon Imports/Exports in Q1 (in $B) 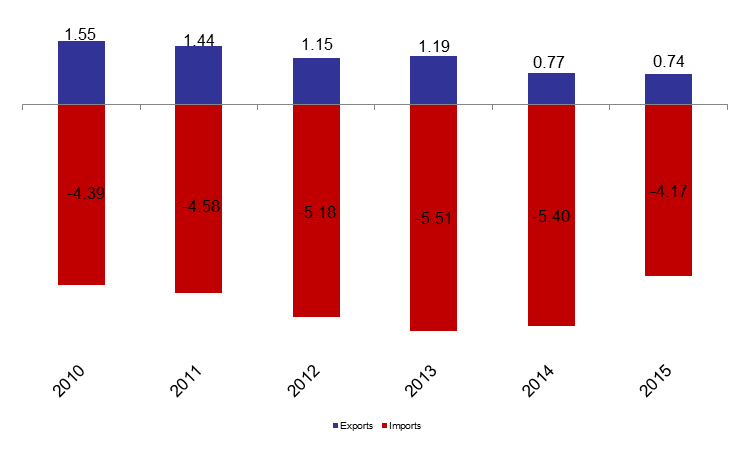