Besides the spending cuts and the revenue boosting initiatives to reduce their fiscal deficits, as a response to the drops in oil prices, the United Arab Emirates (UAE) were, as usual maintaining their busy schedule. Among many projects, Dubai will be hosting the World Real Estate Congress in 2018, to be the first Middle Eastern country to win the bid organized by the International Real Estate Federation (FIABCI), and that will strengthen Dubai’s economy through attracting business and leisure visitors. Plus, Abu Dhabi Global Market (ADGM) has signed a partnership with Paris Europlace in order to improve financial services within the two markets, and to facilitate long-term investment opportunities. In addition, the latest development regarding the Expo 2020 was the Route 2020 that links the Nakheel Harbour and Tower station on the metro’s Red Line to the Expo 2020 site which will be achieved by the end of 2019, consisting of 15km of over ground and underground track, with a budget of $2.88B. 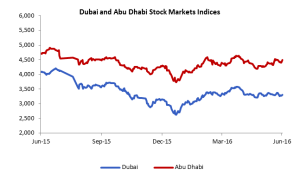 In the tourism sector, DXB welcomed 34.6M passengers during the first five months of 2016, compared to 32.3M during the same period last year. The continuous efforts to fulfill Dubai’s future target of 20M visitors by 2020, led to a diversification of tourists to promote the Emirates as a destination for middle-class travelers. 16 new tourist attractions are opening, including the $707M Six Flags theme park in Dubai.

The hospitality sector in the UAE saw a slowing performance during H1 2016. Despite the fact that Dubai witnessed a 5.1% increase to reach 4.1M overnight visitors in Q1 2016 compared to Q1 2015, the occupancy rates declined during the first six months of the year. This drop may be the result of a slowdown in the number of visitors in Q2 2016, a decline in the average duration of stay by tourists, an increase in the number of hotel rooms, or a combination of the three factors. In fact, 4- and 5-star hotels in each of Dubai and Abu Dhabi registered similar yearly declines of 3 percentage points (pp) to 81% and 77%, respectively. Meanwhile, Abu Dhabi’s average room rate (AVR) dropped 15.2% y-o-y to $132 during the first six months of 2016, while Dubai’s AVR decreased by 5.3% to 268$. Concerning the revenue per available room (RevPar), it fell down by 18.9% in Abu Dhabi to $102, and dropped by 8.7% in Dubai to $218. According to the Dubai Hotel Market Overview, 621 new hotel rooms have opened during the first quarter of the year, and additional 9,400 rooms will be added to the market by the end of 2016, like the W Dubai – Al Habtoor City that was launched on June 20, the Lapita Hotel Dubai, Hard Rock Hotel Dubai Marina and Nikki Beach Resort & Spa Dubai. On the other hand, Abu Dhabi’s visitors will be facing new tax on hotel stays by an additional 4% of a guest’s hotel bill, plus $4.08 per night per room, which will cause some visitors to reduce the number of days spent, at least for the first few months before they get used to it.

The external sector in the UAE is suffering from the droopy oil prices, which in turn resulted from the retrograded hydrocarbon exports. In fact, the UAE is expected to record its first current account deficit in 2016 that could reach $1.2B (around 0.3% of GDP). As stated by the Institute of International Finance (IIF), the trade surplus is estimated to narrow 15.05% to $62B by the end of 2016. Total exports are forecasted to slip by a marginal 1.8% to $297.2B in 2016, of which only 16.28% are hydrocarbon exports. Still, the 20% yearly decrease in Hydrocarbon exports is projected to outweigh the 2.8% yearly rise in non-hydrocarbon exports. In contrast, imports are forecasted to reveal a 2.5% yearly increase to settle near $235B.

Concerning the fiscal sector, the consolidated government balance is expected to register a deficit of $22.79B (almost 6.4% of GDP) by the end of 2016, that is substantially above last year’s estimated deficit of $13.61B (3.8% of GDP). Consolidated revenues are forecasted to slump by 11.9% in 2016 following an 18.3% yearly drop in hydrocarbon revenues (51% of total revenues) and a 4.2% annual decrease in non-hydrocarbon revenues. As for consolidated government expenditures, the IIF foresees a drop in 2016 by a slight 3% to reach $117.39B.

Daily Capital Markets’ Performance
Syria: A Boiling Point for the Regime, the Opposition and the Population