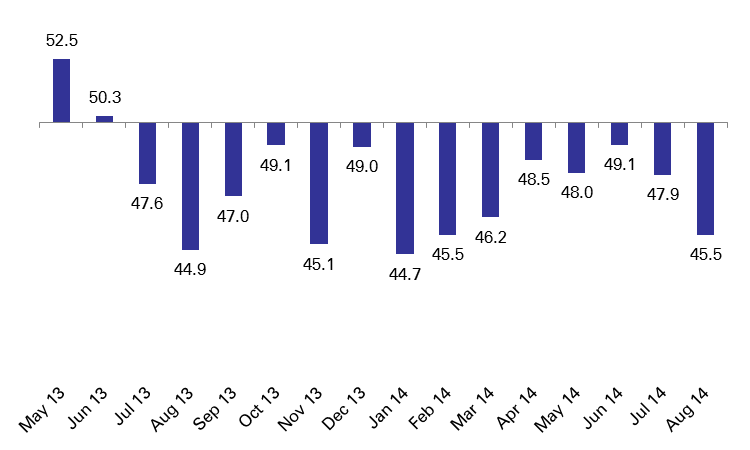 This report contains the first public release of data collected from the new monthly survey of business conditions in the Lebanese private sector. The survey, sponsored by Blominvest Bank and compiled by Markit, has been conducted since May 2013 and provides an early indication of operating conditions in Lebanon. The headline figure derived from the survey is the Purchasing Managers’ Index™ (PMI™).

The PMI is a composite index, calculated as a weighted average of five individual sub-components: New Orders (30%), Output (25%), Employment (20%), Suppliers’ Delivery Times (15%) and Stocks of Purchases (10%). Readings above 50.0 signal an improvement in business conditions on the previous month, while readings below 50.0 show a deterioration.

At 49.1 in October, the BLOM PMI™ posted a reading below the neutral 50.0 mark, indicating a deterioration in overall operating conditions for the fourth successive month. However, by rising further from a low of 44.9 in August, the rate of contraction is now only marginal, with the PMI having signalled a marked easing in the pace of contraction over the past two months. Lebanese companies reported that levels of production, new orders and new export orders were all moderately lower than one month ago in October. The main factor driving the trends in these variables remained the challenging economic and political situation within Lebanon and also in neighbouring states.

The downturn in the Lebanese private economy was also partly reflected in the labour market, as lower levels of business activity and new orders discouraged companies from taking on additional staff. Employment levels were therefore broadly unchanged since September, while average wages and salaries were also little-changed over the month. Overall cost inflationary pressure continued to ease in October. Apart of the near-stagnant trend in staff salaries, companies reported a further easing in the rate of increase in average purchase prices as well. Moreover, average purchasing costs rose at the weakest pace in the six-month survey history.

The PMI survey also collects data on suppliers’ delivery times, which provide a useful advance indication of likely supply-side inflationary influences. When lead times lengthen, this often indicates that input prices may rise as suppliers struggle to meet current raw material demand. October saw little-change in average vendor lead times, consistent with a benign near-term outlook for supply-chain price pressures. Efforts to rebuild stocks led to an increase in purchasing activity for the first time in four months during October. Input buying activity rose to a modest extent, with just over 7% of companies reporting an increase. Subsequently, stocks of purchases showed a solid expansion since September, with the rate of growth in inventory levels the steepest since May.