BDL’s foreign assets (grasping 16.91% of total assets) decreased by 30.43% ($11.34B) year to date (YTD) to stand at $25.93B in September 2020. This notable decline is driven by BDL’s subsidization of imports of basic commodities (such as medicine, fuel and wheat) and basic food imports including a basket of 300 essential food items, in addition to imports of industrial raw materials. Anecdotal evidence also points to the paying back of loans and/or deposits in foreign currency. Worth mentioning that foreign assets dropped by $2.53B during September, leaving the Central bank with minimum bank reserves that cannot be used to finance trade, thus adding pressure on finding new ways to support basic commodities. In turn, BDL’s Securities portfolio (25.67% of total assets) climbed to $39.36B in September 2020, up by 3.59% since the start of the year.

On the liabilities front, Financial sector deposits (70.18% of BDL’s total liabilities) recorded a downtick of 3.93% YTD to settle at $107.61B in September 2020. Notably, Currency in Circulation outside of BDL (10.27% of BDL’s total liabilities) rose from $7B end-December 2019 to $15.75B in September 2020. This uptrend in circulated currency has been ongoing since the beginning of the year, as it continues to reflect clients’ strong preference for cash amid the growing uncertainty and feeble trust in the economy. Moreover, the excessive money creation in Lebanese Pounds has added pressure on the exchange market and powered inflation. In details, BDL’s circulars No.148 and 151 further supported and facilitated cash withdrawals, as the circulars allowed depositors with foreign currency accounts to withdraw their savings in Lebanese lira at close to the market rate.

BDL Currency in Circulation, Total and Foreign Assets in September (in $B) 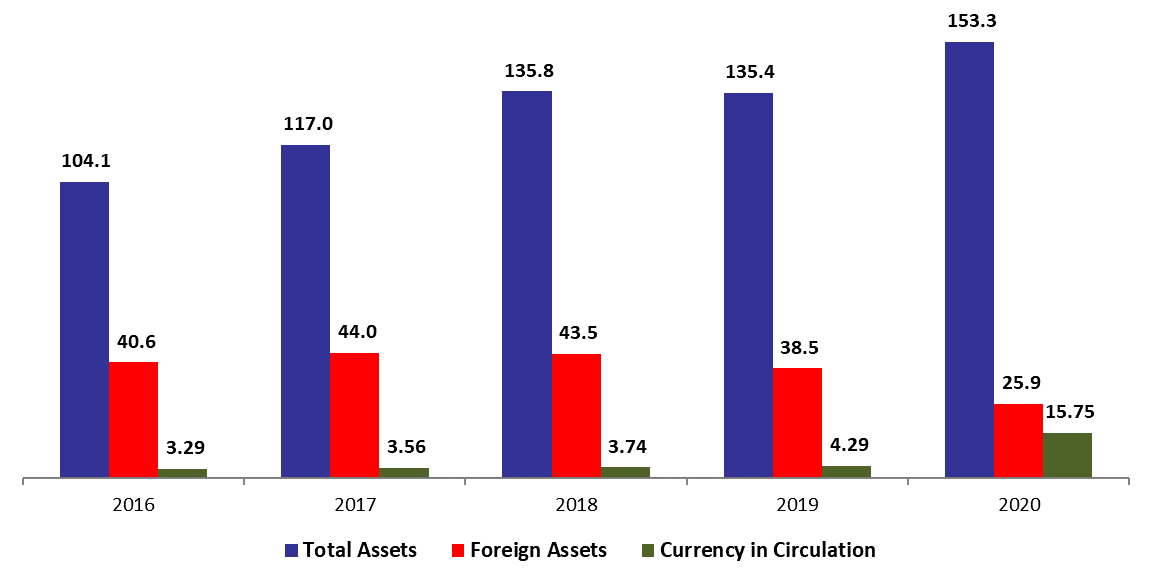