According to BDL’s latest monetary report, the BOP recorded a deficit of $1.47B in the first three months of the year 2022, compared to a deficit of $847M over the same period last year. Accordingly, Net foreign Assets (NFAs) of BDL fell by $1,516.7M, as BDL has continued to make some intervention on Fx market through the “Sayrafa” rate while the NFAs of commercial banks increased by $43.3M in March 2022.

The sharp drop in the balance of payment deficit was driven by many factors, such as the trade deficit, high inflation rate and political instability. First, the trade deficit in Lebanon was accelerated when the government instituted in early 2020 a blanket subsidy program on imports, which naturally resulted in bleeding out the foreign reserves. Second, Lebanon witnessed a high inflation rate of 208.13% by March 2022, due to the sharp devaluation of the national currency, and finally, the political instability in Lebanon has led to large capital outflows and the reduction of inflows of foreign funds, thus, creating a persistent disequilibrium in the BOP.

Balance of Payments (BoP) by March (in $M) 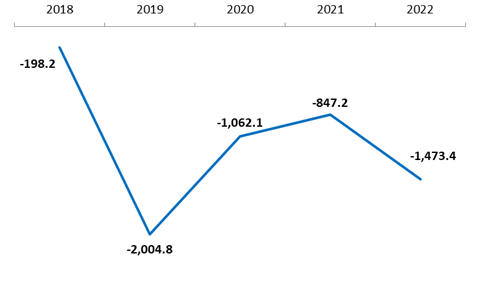