Solidere SAL recorded a net loss of $87.2 million compared to a net profit of $113.7 million in 2014, due to the cancellation of 2 sales contracts sealed in previous years, and a lower investment appetite in the real estate sector in general. Accordingly, total revenues for Solidere plunged by 61.80% to $91.30 million, and in particular, revenues from land sales plummeted from $169.47 million to $26.80 million.

The company explained in a press release that the lower-than-expected profits were due to the cancellation of 2 contracts whose holders failed to uphold their payments, and a subsequent rescheduling agreement couldn’t be reached. This led Solidere to take legal action and allocate provisions of $82 million on the previously recognized sales. The total provisions taken in 2015 for impaired receivables stood at $104.2 million.

Nevertheless, the company succeeded in 2016 in closing several new sales deals, totaling $158 million. Solidere also estimates further sales during the year that can lead to a total of $200 million worth of sales. If sales remain on track and excluding any provisions in 2016, the company may be able to achieve profits totaling around $100 million at year end.

Solidere’s investors’ relations explained that while the average price per sqm has only slightly declined in absolute terms, it has been indirectly reduced as the company became more flexible in the offered payment terms, adding a grace period for investors and extending the installment period from 5 years to 7 years. It is worth noting that Solidere is financing the buyers at a minimum interest rate of 5%.

Revenues from rented properties remained rather stable in 2015, and the noticed decline from $61.48 million to $56.97 million was mainly the result of one off transaction in 2014 relating to payments from the ministry of foreign affairs for the ESCWA building. Revenues from rendered services slightly ticked down from $8.06 million in 2014 to $7.53 million in 2015.

Solidere had limited its capital expenditures to the development of infrastructure in the waterfront area and the department stores, which will be handed to tenants during this year.

The company owns a land bank of 1.75 million sqm valued at $6.8 billion by FFA, in addition to income generating projects valued at $1.4 billion. FFA was commissioned by Solidere to perform the valuation.

As for Solidere International (SI), the company achieved net profits of $61.8 million in 2015. These are still the result of the revaluation of properties and projects owned by the company through its funds, after the completion of new phases of development and construction. The driver of profits was the unrealized gains which represent the difference between the cost of lands and projects and their fair value in 2015, amounting to $66 million.

Solidere International expects cash flows to start in 2016 with the completion of several income generating projects and the exit from 2 current projects.

The share price of Solidere was minimally impacted by the released results, as the effect was already priced in after several months of economic and political stagnation and low demand in the real estate sector. 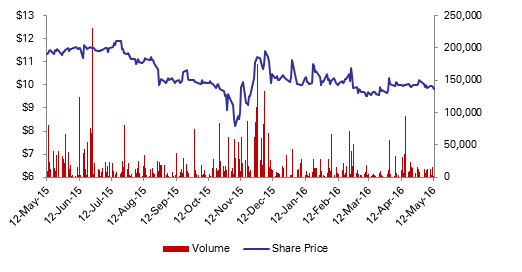 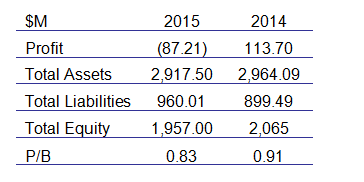 The Lebanese Bourse Ended Today’s Session in the Red
RAMCO: The Downward Trend in Residential Sale Prices Continued in 2015