Lebanon was in a state of “economic recession” in 2019. GDP growth dipped into negative territory in the consecutive quarters Q1 and Q2 of 2019. During the period, a political deadlock prolonged parliamentary negotiations which extended over 8 months, before the formation a new cabinet was announced on Jan. 31st 2019. By October 17th 2019 civic protests erupted across Lebanon, catalyzing a full-fledged financial and economic crisis.

Surprisingly for a year in recession, Lebanon’s cash-basis fiscal deficit narrowed yearly by 6.57% from $6.24B in 2018 to $5.83B in 2019. The smaller deficit comes as a result of the 5% yearly decline in government spending (including treasuries), which outweighed the 4.17% annual retreat in total public revenues. In fact, total government revenues and expenditures (including treasuries) stood at $11.1B and $16.90B, respectively. In its turn, the primary balance which excludes debt service, posted a deficit of $286.21M over the same period, compared to a deficit of $635.64M in 2018.

The breakdown of the fiscal performance of the Lebanese government in 2019 showed that “Tax revenues” (constituting 78.88% of budget revenues) decreased by 1.81% year-on-year (YOY) to $8.31B in 2019, of which “VAT revenues” (25.99% of total tax receipts) dropped by 15.17%YOY to $2.16B. The drop in VAT revenues is most probably attributed to the low growth environment and the ensuing reduction in spending since the beginning of the year, which outweighed the positive effect of raising the VAT rate from 10% to 11% effective January 2018. Moreover, “Customs revenues” (14.36% of total tax receipts) retreated by 11.09% to reach $1.19B.

Treasury transactions in their turn (inclusive of revenues and spending that are of temporary nature) posted a deficit of $717.79M in 2019, compared to $624M in the same period last year. 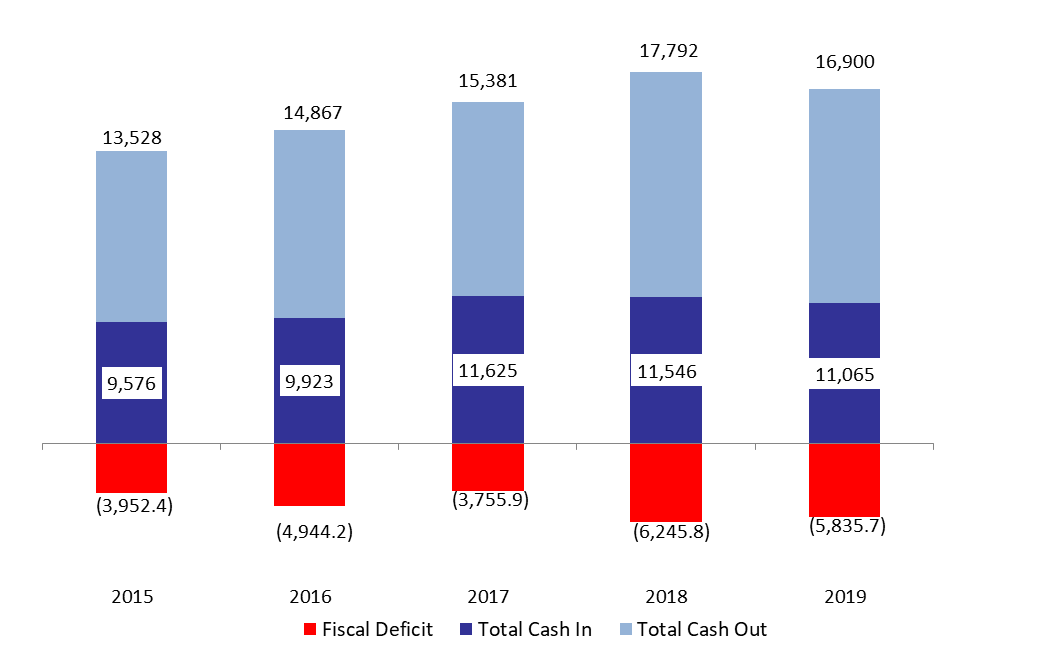 Overview of the Lebanese Economy in 2019
Daily Capital Markets’ Performance