Accordingly, total container activity including transshipment (TEU+TS) increased by a yearly 15.25% to stand at 57,865 twenty-foot equivalent unit (TEU); container activity (TEU) alone increased remarkably by 17.68% year-on-year (YOY) to stand at 46,362 TEU by March 2022. In its turn, transshipment activity (TS) also increased by 6.36% YOY to 11,503 TEU over the same period. It is interesting to note that despite the rise in fuel prices, the activity at Port of Beirut has increased in the month of March 2022.

On May 18, 2022, the World Bank and the United Nations Development Program (UNDP) signed an agreement, in the presence of HE Minister of Environment Nasser Yassine, approving to grant Lebanon 10 million United States dollars in order to help diminish the environmental and health side effects caused by the Port of Beirut explosion on August 4, 2020. In addition, it will support a strategic plan for the reconstruction of Beirut. Through this partnership, they will work alongside the ministry of Environment for a green Beirut’s reconstruction. 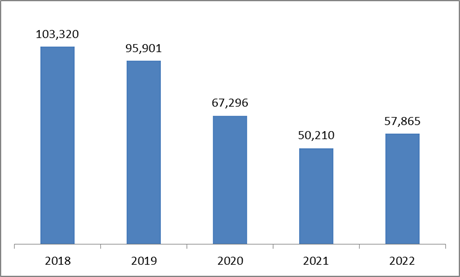