According to Lebanon’s consolidated commercial banks’ balance sheet, total assets decreased annually by 5.2% to stand at $171.25B by July 2022.

On the assets side, currency and deposits with Central Bank represented a high figure of 66.58% of total assets; they recorded a yearly uptick of 3.73% to settle at $114.02B in July 2022. Deposits with the central bank (BDL) represented 97.47% of total reserves, and slightly increased by 2.62% YOY, to reach $111.13B in July 2022. Meanwhile, Vault cash in Lebanese pound jumped by 78.59% on a yearly basis to stand at $2.88B by the same period. The increase could be attributed to the heavy transfers of cash in Lebanese pound from the commercial banks towards the Central Bank’s vault as banks are receiving significant volumes of cash coming from Sayrafa transactions.

On the liabilities side, resident customers’ deposits were the main account, representing 60% of total liabilities; they decreased by 2.5% since July 2021 to reach $102.82B in July 2022. In more details, the Lebanese pounds’ deposits registered a 16.9% increase on an annual basis to stand at $27.26B while the deposits in foreign currencies decreased by 8% yearly to reach $75.56B by the end of July 2022. Customers seem to deposit more Lebanese pound into their accounts while others are conducting limited withdrawals in foreign currencies; in addition most of transactions today are only paid in fresh dollars. For example, the majority of Real Estate purchases and constructions are fully paid in fresh cash.

Commercial Banks Assets and Residents Customer Deposits by July ($B) 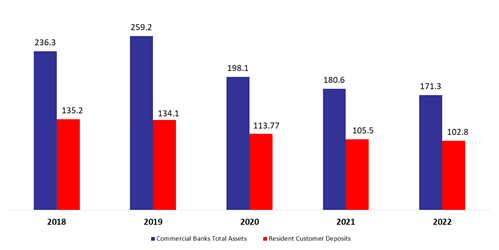 Daily Capital Markets’ Performance
Balance of Payments Deficits at $2.78B by July 2022